“I have always enjoyed history, but after writing my first book, my sense of appreciation turned to fascination. Now, with this novel, I may revisit my first book, do some revision and see what happens.” 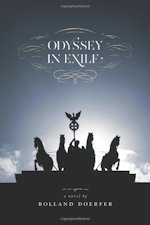 When Bartholomew, a Swiss Prince, out of duty to his people, enters into an arranged marriage to Suzanna, a woman from Alsace and who is a budding spiritualist, everyone is excited about it except the prince and his French bride-to-be. A few months after the wedding, Bartholomew leads his Catholic allies into forming a separate confederation from the Protestant members. A force of arms ensues and the three week skirmish ends in defeat for Bartholomew. He takes blame for the disaster and is forced into exile.

The couple’s journey takes them to Baden, Germany, where an unusual friendship develops with Peter, a dock worker and labor leader after each assists the other in time of distress.

This is a story about a love that requires nourishment because of an uncertain beginning. It is also a saga of survival in the face of civil unrest, in which Peter plays a major part. They develop friends on both sides of the social issues, places them in possible jeopardy. A German official dies at the hands of one their friends, giving rise to the threat of being charged with conspiracy and are forced to leave Germany.